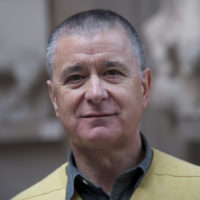 Initiated teaching activity in 1982, in Architecture Course at Escola Superior de Belas Artes do Porto, with continuity to Faculdade de Arquitectura da Universidade do Porto, where he teached Project.

Guides PHD Thesis and, until 2010, the subject Thesis Project from PHD Course of Faculdade de Arquitectura.

From 2010 until 2018, he was FAUP’s Dean, having integrated the Universidade do Porto’s Senate during that time.

In the end of the 80s, co-founded the company CG+LSC, Arquitectos (www.cglsc.com) as an architect, in partnership with the architect Luís Soares Carneiro, where they develop a professional activity that extended from building project to land-use and territorial planning, having Architecture and Urban Design works, with special impact on public equipment programs.

He carried out projects for Maputo, Mozambique, where they were built tertiary programmes and housing buildings.

Keeps a professional and academic regular collaboration with diverse institutions (academic, professionals, from of civil society and the Public Administration).

Belongs to Casa da Arquitectura — Portuguese Centre for Architecture’s Board of Directors from 2008 until nowadays.

Between 1999 and 2004, was president of Ordem dos Arquitectos (Association of Architects – Regional and North Section), General Assembly’s President between 2005 and 2007 and President of the National Congress of Portuguese Architects in 2003.